Quackery — a dishonest practice that claims to have special knowledge and skill in some field, typically medicine!

I want to tell you about a tiny germ that is constantly changing its shape and design. It’s so little that no one can see it without magical glasses.

The germ can enter your body, infect its cells and make you have terrible diseases that magical potions can only manage.

Sometimes the tiny germ won’t make you sick at all. Instead, it stays in your body quietly and waits for you to pass it on to your friends and relatives so that it can make them sick and have to be made well by magic potions.

If you follow the priest’s instructions and believe that the magic wand and potions work, you are praised by others who also believe the same things.

If you don’t follow the priest’s instructions and believe the magic wand and potions work, you are ridiculed by others who believe the words and wisdom of the priest.

A large portion of modern medicine is based on quackery and unscientific principles that have been inserted into the profession and promoted by big pharma.

When your body’s natural immunity becomes compromised by too much stress, medicines, vaccines, and other toxins, naturally existing bacteria and fungi that usually would never harm you can make you ill.

The body’s natural immunity will write genetic instructions (genomic sequences) and pass them throughout the human system. The instructions tell the body how to create fever and other symptoms that kill or dismantle the infections.

The genomic sequences that deliver the messages throughout the human body to get people healthy have been mislabeled by big pharma and others as viral pathogens that can make you sick.

The false narrative described above is embraced by medical teaching institutions and passed on to the general public as science-based medicine.

Healthcare consumers have been the recipients of quackery and health disinformation for so long that they cannot separate fact from fiction.

After announcing a ground-breaking cancer cure, the four members of the research team are targeted by an assassin hired by the big pharma. Two researchers escape the attack, only to find themselves on the killer’s target list.

The Target List is now in the final stages of post-production, where the sound design, music score, and VFX enhancements are being incorporated into the film.

You can begin to help this film garner critical attention before its official release by doing the following:

Once again, thank you so much for your continued support of this project and NoFakeNews!

The controlling powers are using any means possible to convince innocent and trusting citizens worldwide to get the experimental, untested, unapproved EUA issued bioweapons disguised as vaccines.

Let’s get a few things clarified before I dive into this article any further. The COVID-19 vaccines do not protect people from contracting sars-cov-2. There are no attenuated viral isolates in any of these gene-altering drugs. Because of this fact, the vaccines can’t build immunity in human or animal hosts.

The mRNA shots do not prevent the transmission of the fake virus or the fake disease it allegedly causes to other human subjects. According to the manufacturers’ official drivel, the vaccine products are only 95 percent effective in lessening some of the symptoms in people when the fake virus infects individuals. The vaccines are also supposed to be 95 percent effective in preventing people from testing false-positive when being administered a bogus PCR test that is routinely over-amplified to create millions upon millions of fake case numbers during its development process in laboratories.

If you’re on the fence about the COVID vaccine maybe you should listen to… DOCTORS!? pic.twitter.com/vGKYfuwjWj

Please don’t listen to the doctors on Jimmy Kimmel Live telling us to take these vaccine products because those professionals are not giving out good health advice. They are paid, liars. Many healthcare professionals are simply parroting the written scripts handed down to them by the hospital corporations and the other business facilities where they are employed. If they do not follow that official narrative or script, they will be terminated from their employment positions.

Additionally, it’s important to remember that many medical and scientifically gifted individuals are the easiest persons in the world to fool when it comes to pulling off medical fraud. These people have been brainwashed for so long by medical and scientific dogma; they can’t see the obvious red flags waving directly in front of them.

A FEW WORDS ABOUT THE FAKE VIRUS

If you are still wearing a face mask and thinking about the imaginary virus unleashed from China — grow a brain! The virus is one hundred percent fake. The reason being is that a person’s immune system renders all viruses harmless. Unless people are significantly immunocompromised, no virus, naturally occurring or modified in a laboratory, can harm them!

The actual scientists who have a genuine understanding of microbiology and human physiology understand what I have written to be true. Many scientists are claiming this but are censored broadly.

The people who authored this science fiction event (the plandemic) knew early in the planning stages of the operation that an actual virus released into the atmosphere would never infect the population. That entire concept is something that can only be accomplished in a Hollywood movie script. The great COVID-19 movie show writers knew that they had no choice but to create a fake lab test that would make a fake virus look real and menacing. All of what we have been living through since January 2020 is sleight of hand baloney.

The virus is fake! The deadly vaccines were created long ago and held in storage until a problem-reaction-solution psyop could be unleashed to get them administered globally. That is what has happened!

The Target List Movie is Coming Soon to Amazon Prime!

The Target List pilot movie is a high-energy, fast-paced medical-action-thriller.

Interviews with the cast members from The Target List pilot movie will be featured here weekly. Stay tuned for important announcements about the release of the movie’s official poster and trailer.

Take a look at some behind-the -scenes photos from the movie set:

All Photos © 2021 by Mad-Wife Productions

Things are getting more bizarre by the day as the hysteria builds in communities throughout the world over the fake coronavirus pandemic.

In my community, certain stores now require customers to wear a face mask to enter the building. The draconian recommendations coming from the CDC are being implemented by huge corporations as well as mom and pop businesses.

Each day a little more of our civil liberties are being removed, and most people are not overly concerned.

I am extremely bothered by these rules and have worn a sign hanging from my neck along with the face mask to comply with the stores’ policies when entering their premises. 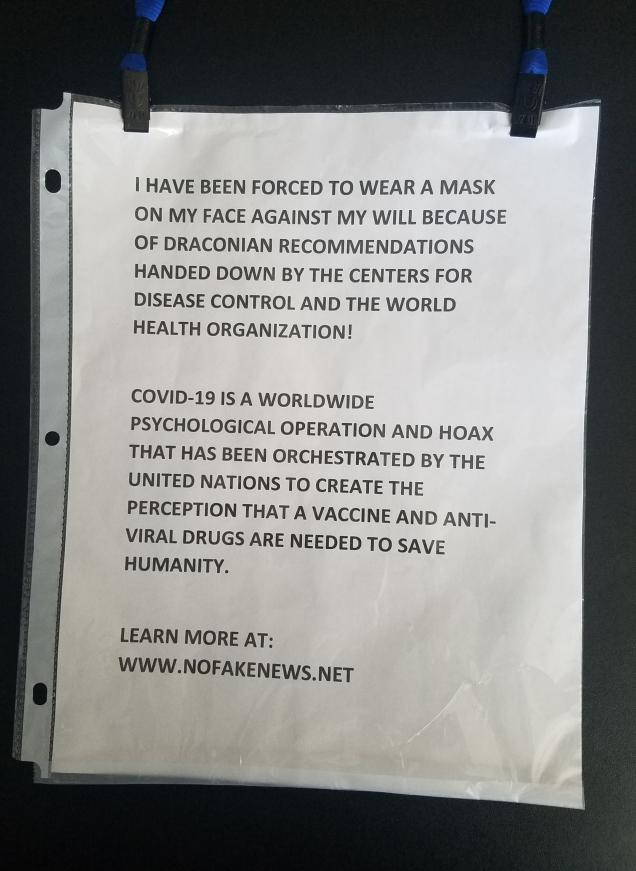 I think people better start protesting before the world changes so much that it will become impossible to protest in the future.

I implore everybody to consider wearing a sign similar to the one above upon being forced to wear a mask against their will.

What do you think about this approach?

Remember the fascinating television program about Caesar Milan, the Dog Whisperer?  Caesar is a dog behaviorist and fearless with dogs.  He taught all of us about dog behavior.

Conspiracy whisperers are individuals the world over who see through false flag operations and expose these diabolical man-devised operations to others.  Every war on earth is man-made hell and is always fueled by massive lies and propaganda.

There are in fact thousands of hellish man-made conspiracies, from 9/11, Waco, the JFK assassination, the Columbine school shooting, the Oklahoma Murray Building event, to train bombings and very obvious intentionally orchestrated violence in England, Spain, Bali, Japan and endless countries around the world.

The mentality behind all such horrors is that there is some gain to the perpetrators when in reality there is zero gain.  The perpetrators of death and destruction are not immortal human beings and 100% of them will end life in the graveyard, the same as all other humans. So what is the gain in conspiracies and violence, lies, and propaganda?

Every billionaire on earth will bite the dust and end life naked and penny less.  All power and control over the masses are always temporary.  No tyrant or dictator lives forever and they always return to dirt in due time.  History is full of the bones of arrogant men and women who were insane dictators and rulers and every single one of them ended life in the graveyard.

Every vaccine lord and every pharmaceutical mad-man will pass from this life naked, having gained absolutely nothing from their fear-mongering Coronavirus scam, toxic vaccines, and money-making poisons.

Human beings seem to coexist with alien creatures who look like us, but who have no conscience.  False flag operations the world over have wreaked havoc and horror upon humanity.  Millions of knowledgeable, rational people see through the manufactured fog of lies, propaganda, and deceptions.

When man-made laws are engaged to force humans to believe what the “laws” (used toilet paper) say, all smart people know this is a total scam.  There have been many false flag events and, not just in the U.S. In America the highly controlled television “news” mocks and ridicules anyone who speaks the truth about such events as 9/11, which was presented to the public in a very different manner than who really did it and how it really happened (not airplanes).  Much of the world knows the real source and many details about this egregious intentional outrage.

False flag operations are skillfully preplanned in every detail and behind closed doors. They are always implemented for hidden motives and continually lied about up one side and down the other. Indeed conspiracies are as old as dirt (human origin).

There could be tranquility and general peace and harmony on Earth, and among all people, if these “alien creatures” who look human, but who have no conscience, did not perpetually create chaos.  They seem to take great pleasure in deceiving and lying and stealing and having power and control. And most of all, they enjoy accumulating $wealth.

From my perspective, these creatures of darkness will eventually destroy all human life on Earth, unless there is some way to remove their madness and insanity from causing endless suffering.  Covid 19?