There is a lot of misinformation about “Luciferase” and “Luciferin” so here are the facts:

Luciferase is a just another type of protein like Albumin or Insulin. Like Albumin, which transports nutrients to cells in the bloodstream, and Insulin that tells our cells to absorb sugars when they are too high in the blood, Luciferases are just ordinary proteins with functions.

Luciferase is not an evil molecule. Its name comes from the words “lux” which means light, and “ferrous” which means to carry. Together the combined words mean light-bearer or light-carrier. The term has nothing to do with Satan, but popular folklore has tried to rename Satan as Lucifer. It has more to due with the bright shine of planet Venus.

Luciferase does not make light by itself, instead, it is an enzyme that causes oxygen to combine with an anti-oxidant called Luciferin. Luciferin is a high-energy molecule like gasoline, and when it burns (oxidizes) it releases carbon dioxide and energy. However, unlike gasoline 98% is light and 2% is heat.

Without Luciferin, water, and oxygen, Luciferase will not make light. Our oceans are chock full of Luciferases and Luciferin. Just about 70% of all the animals in the ocean glow just like Fireflies, which use similar chemicals to make light. Go to the beach at night anywhere on earth, and you will find glowing bacteria, or small patches of organisms that glow when touched or disturbed. 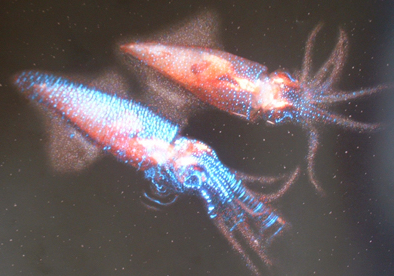 Luciferase and mRNA Vaccine Development:  As you may have heard, liposomes are small synthetic membranes “baggies” that hold the mRNA in them. The liposomes are designed to fuse with the membranes of cells and deliver the mRNA into the cell so the cell will start making proteins that are encoded in the mRNA.

When the vaccine manufacturers wanted to find out where their vaccine products would go, and which cell types the liposomes would go into, they used mRNA encoding Luciferase instead of a Spike Protein. After making a mock vaccine, with liposomes that contain mRNA for Luciferase, they injected their research mice or rats with Luciferin and positioned movie cameras over the mice so they could see where the Luciferase was glowing in real time.

Then they analyzed the distribution by filming the Luciferase glowing.

Important: As long as Luciferin is being injected and available to the Luciferase, the light stays on. Once Luciferin is used up, like gas in a car, the light will go out. Shining UV light on it will do nothing.

Here is an example of how Luciferase is used to see if the new drug works on Glioblastoma — a nasty brain cancer:

As you can “see” the mice on the left received saline as a control. The mice on the right received the treatment of a shark antibody. No surgery was required to obtain these images, only injection of the Luciferin into the tail vein with a tiny needle. Skull bones of mice are thin enough that light shines through. (Picture courtesy of Bakhos Tannous, PhD and Jian Teng, MD at Mass. Gen. Hospital. Shark Antibodies Kill Brain Cancers).

Fluorescent Proteins in Vaccines:  Video veins from the internet:

What are “Fluorescent Proteins?” A brilliant man, Osamu, (remarkably as a youth was blinded for many days from the Nagasaki bomb) and his wife, Akemi, (the Shimomuras) were interested in the Sea Fireflies in Japan’s bays (Cypridina ostracods related to clams, Japanese name is Umi-hotaru), so the Shimomuras spent many years researching how to purify the Cypridina Luciferase and Luciferin.

The Shimomuras were invited to Friday Harbor Marine Laboratory in Puget Sound. While there, at night, they noticed many green glowing jellyfish floating by the boat dock at the lab. So, their nights spent catching Aequoria jellyfish, led to their discovering how these jellyfish made bright green light.

Dr. Shimomura, received the Nobel Prize for the discovery of Green Fluorescent Protein (GFP). It is a barrel shaped protein that produces green light when UV light shines on it. At night there is no UV light, so the jellyfish have a special Luciferase held right next to the GFP. When Luciferin (called Coelenterazine) is released, the Luciferase makes high energy electrons that directly dump their energy into the GFP and cause it to glow bright green, the blue light it makes is not seen by the human eye.

Since the Shimomuras’ discovery, many fluorescent proteins of every color have been discovered, some were synthetically mutated to have different properties. There are now many colors and there are all kinds of fluorescent proteins. You have seen them in the beautiful corals at many aquariums and tropical fish stores.

GFPs and Fluorescent Proteins are actually not toxic to cells. Whole animals have been bred to express these proteins in their skin cells. Here we have a picture of two mice, one mouse has Dr. Shimomura’s jellyfish Aequoria GFP and the mouse on the left is normal:

Under UV or  Black Light

As the picture above shows, mRNA in the Pfizer vaccine tells the cell how to make the GFP known as mNeonGreen. All Fluorescent Proteins have different spectra. This fact means if we shine or “excite” them with a certain color (wavelength) of light, they absorb that light and re-emit it at a different wavelength (color). Here is the Excitation and Emission Spectra of mNeon Green GFP:

Click on the link (above) to explore other fluorescent proteins at Fpbase.org.

Pfizer’s former Vice President, Micheal Yeadon, and Wolfgang Wodarg both ethical scientists, tried to stop deployment of the Pfizer mRNA vaccine by petitions to the FDA, CDC, and EU authorities where they claimed:

X. Excerpt: [“Pfizer/BioNTech is also inserting an ingredient derived from

a marine invertebrate, mNeonGreen, into its vaccine. The ingredient has bioluminescent [Fluorescent]

qualities, making it attractive for medical imaging purposes, but it is unclear why an injected

vaccine would need to have that quality. mNeonGreen has unknown antigenicity.”]

What that means is the mRNA used in the “vaccine,” contains the protein coding sequence for a CoV Spike Protein, and the coding for the mNeonGreen, in other words, both proteins.

The CoV Spike protein has a special membrane anchor so that it will stick to the outside of the cell. The mNeonGreen stays inside the cell so it can hide from our immune system.

In this author’s opinion: mNeonGreen GFP was chosen because its excitation is similar to light sources used to check documents at airports. It would be easy for authorities to determine if a person had been vaccinated or not by using the light on their hand and seeing the green fluorescence.

We do not know the lifetime of the GFP in cells yet. This will be a useful marker in an experiment of this size to find out if the “vaccine” mRNA is converted into DNA and permanently incorporated into the DNA of our cells for the duration of our lives.

Since these mRNA injections are made into the arm, the liposomes being so very small, distribute quite rapidly all over the body. They can fuse with many cell types. Each liposome contains 30-40 mRNA molecules and once inside the cell each one can make 500-1000 Spike proteins and GFPs. This should be very disturbing to everyone.  Who wants their neurons, kidney cells, or our heart’s electrical conduction pathway cells to be covered with CoV Spike Proteins?  How can this be a good thing?

Our vascular tree is like a river. Narrow arterial sections have fast flow, and wide venous areas have slower flow.  Liposomes that enter arterioles may not affix to the lining cells because they are moving too fast. The wider veins have slower flow and the longer transit time allows more liposome fusion with the vein’s endothelial lining cells. It makes sense to me that as liposomes encounter the large veins of the hand they could concentrate along those vessel walls and fuse with endothelial cells, which is evidently happening as seen in the videos.

While it is easy to dismiss the videos as fake, the fact they are using those bluish light sources, and not true black light (UV) supports their honesty.

In my opinion, everyone should be deeply saddened that our FDA and CDC have not pulled  these “vaccines” off the market after the first few adverse reactions and deaths. The inaction and promotion by our government in this activity is quite concerning. Who is really running the show?

I NEED YOUR HELP TO MAKE “THE TARGET LIST” MOVIE GO VIRAL! PLEASE VISIT THE OFFICIAL WEBSITE (Click Here) AND REBLOG OR SHARE BROADLY ON ALL YOUR SOCIAL MEDIA PLATFORMS. WE CAN WAKE UP THE WORLD TOGETHER AND THIS IS A GOLDEN OPPORTUNITY TO GET IT DONE!

The Target List movie honors fallen heroes and serves to help us remember the brave healthcare professionals that have lost their lives simply because they wrote about things that certain groups forbade. These truthers were placed on a target list because they wanted to shed light on helpful modalities and procedures that could allow human beings to better express health.

Please share our movie website, and be sure to watch The Target List when it becomes available in August 2021. Once again, thank you for your support!

7 thoughts on “Luciferase in Vaccines and Green Fluorescent Proteins Explained”