A Guest Writer for NoFakeNews

Some years ago, an esteemed colleague of mine relayed an incident in which she was ridiculed for choosing not to watch the news by a young man who also accused her of being apathetic, ignorant, and uninformed because of this decision. Truth be told, I don’t watch the news either, and surprisingly neither do a startling number of the people I have conversed with over the years.

My friend and colleague didn’t watch the news because she didn’t trust the news and neither do I. When I was in graduate school I had an opportunity to study under a professor that changed the way I viewed the world.

Dr. John Reizer told me many years ago that it’s not just the news, but rather the entire mainstream media that should not be trusted. Dr. Reizer, at the time, explained how all major forms of media in the United States and around the world were owned and operated by a few multinational corporations. He used to explain in his lectures how said corporations would promote the agendas the powers that be desired to be promoted through television programming and print media publications. In his opinion, society was being disingenuously led to believe that it had various choices to receive information from competitive companies that were in reality owned and controlled by an extremely small number of parent corporations. He’d always explain that our collective perception of reality was very far removed from reality.

15 years have passed since I sat in those lectures in the Upstate of South Carolina, but I have always remembered what Dr. Reizer taught our class. I learned many things in graduate school about the human body and how to keep it healthy. Perhaps the most important thing I learned in college was how to really think for myself and to really understand how easily people can become influenced by the media and news companies that constantly surround us with a never ending stream of propaganda.

What my professor was writing and lecturing about years ago has now become the center-point of many important conversations in the present day. Dr. Reizer you were years ahead of your time with regards to this subject matter.  It’s nice to see that you have created this wonderful website and are still, to this day, committed to teaching people about the fake news and media companies.

What about you? Do you still watch the news? 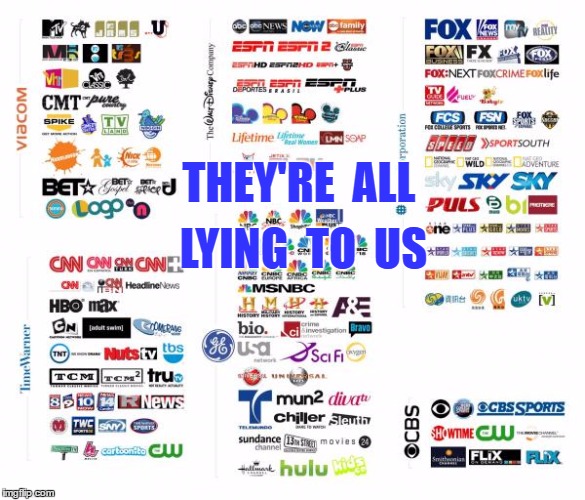 If there is anything positive that has materialized as a result of the 2016 American presidential race, it has to be the public’s realization that the US mainstream media is owned and controlled by very powerful forces behind the scenes.

A small portion of the Matrix that was so beautifully written about in the blockbuster movie with the same name has become completely visible to any individuals with a pulse. For the first time ever, the power-brokers that really manage the world and its associated governments have been forced to over utilize one of their most valuable tools (the mainstream media) in an effort to destroy a very credible threat (Donald Trump) to their planetary empire.

US citizens are finally waking up from a long slumber, a media induced coma that has prevented most people from understanding what the hell is taking place around them at any given time.

I have been writing for over ten years about the lack of journalistic integrity within the mainstream news. The news organizations that most of us rely upon to navigate our way through the daily happenings of life are all owned by a few giant corporations. Mainstream news companies never report the truth about important subjects. They have been spreading disinformation forever that prevents ordinary citizens from understanding what’s really taking place in our country and around the world.

Citizens in today’s society, for all intents and purposes, are so numb and dumb from the onslaught of fake news stories thrown at them via television and other electronic devices; they don’t even realize they’re being played.

The giant corporations that own the news companies also own and operate the television and radio stations that provide entertainment for all of us. In addition, they own the Hollywood studios that create and produce propaganda filled major motion pictures. They also own the companies that report and offer commentary on sporting events. They control just about everything you can access with an electronic device.

Almost everything we have an opinion about has come to fruition because of the giant corporations that own the news and entertainment companies. They have influenced and created our opinions about everything taking place in the world. They have created our reality for us and then convinced us that these opinions are our own.

The companies that collectively control human perception about politics also control our perceptions about everything else you could possibly imagine.

The strategic abilities to control what human beings believe is possible are of paramount importance for the powers that be. The 2016 presidential election cycle has finally made it clear for many of us just how powerful and controlling the mainstream media and its companies can be.

The same powerful and controlling forces that influence our thoughts and decisions in life have a huge stake in who wins the US presidency.

Stay tuned folks; it’s going to get very interesting in the final few weeks before the election is held.