FREQUENCY — A NOVELLA BY JOHN REIZER

After the recording’s release, many people become infected by a mystery illness. The disease causes tumors in the brains of its victims and noticeable changes in their personalities. Some of the stricken are interviewed by two neurosurgeons, Doctors Kevin Dyar and James Ketterly. Their research leads them to an unthinkable conclusion: The cause of the disease is connected to the observatory.

I know there are very important happenings taking place throughout the world and I assure readers that I will be covering them on this website in the weeks and months to follow. I have been working on NoFakeNews for eight years. It’s absolutely amazing how fast time flies.

I wanted to offer everybody a little information about what’s going on concerning my writing projects. That’s pretty much what this post is about. I hope you don’t find the updates too boring; they’re important to me and my family.

For the past year or so, I have been writing day and night; working on several novels and giving my input to another writer working on the screenplay for The Target List which we are both hopeful will become a movie in the not too distant future.

In addition to that news, I am fortunate to have been asked to participate in an exciting new television series that will be released later in 2020. The television series, NO VIRTUE, is currently in preproduction and scheduled to begin filming in June 2020. I am currently a co-executive producer for two episodes.

No Virtue was written and will be directed by MJ Palo and others. MJ Palo is also writing the screenplay for The Target List.

My latest novella, FREQUENCY, was published and released on January 11, 2020, and is off to an amazing start. Frequency has received very positive reviews on Amazon and Goodreads and was such a fun story to write. I have always had a fascination about life existing beyond the parameters of Earth and this science fiction tale takes a long swim in those waters; exploring the possibility that alien life could be sent to our world by an extraterrestrial species through a radio frequency that has traveled 2.2 billion light-years across the universe. It’s a fun, quick read that most people seem to enjoy.

Frequency was a busy book on Amazon in February 2022.

The Frequency novella is currently in production to become an audiobook on the Audible platform in April 2020. Allen Grunerud, the narrator of The Target List audiobook will be the narrator of Frequency. I will post updates as that project progresses.

Nine years ago, I wrote a very short story (Novellete) titled, TRESANTARAS. I have been rewriting that manuscript into a more fully developed novella that will be published very soon under a brand-new title. I will let readers know more about this project once it is published.

What can you tell us about your new release, Frequency?

My latest novella, Frequency is a science fiction story that takes place in the year 2025 in North Carolina.

The story is centered on a fictional radio telescope that records an alien message from a distant galaxy. Shortly after the discovery is announced to the public through a national press conference and uploaded on the observatory’s website, people become affected by a mysterious illness that sweeps through the United States. The disease creates brain tumors in those infected and drastically alters their personalities. 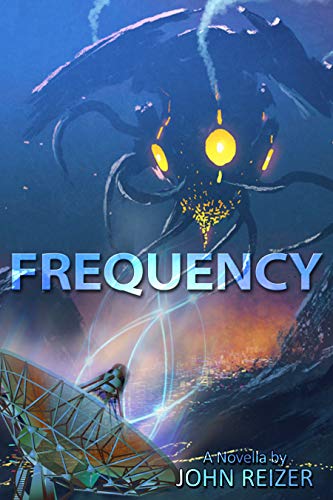 As the story progresses, two neurosurgeons investigating the epidemic come to the amazing realization that the disease is somehow connected to the alien radio message and the observatory.

I believe readers will enjoy Frequency because of how the novella blends fiction with real science. It was a lot of fun to write the book and I am hopeful science fiction fans will find it entertaining.

What or who inspired you to become an author?

I have always enjoyed writing since I was a young boy. At age twelve, I was on a baseball team that captured a world championship at the Little League World Series in Williamsport, Pennsylvania.

The experience inspired me to write a book about the team and our accomplishments. It was published in my freshman year of high school and I have been in love with writing ever since.

Read more of the interview here!

I am giving away 100 copies of my new novella, Frequency through Goodreads. Be sure to enter the contest for your chance to win one of these copies on January 23 – February 4, 2020. On February 5, 2020, 100 random contestants will be selected and the copies will be distributed to the winners by Goodreads. Good luck to everybody!

See the giveaway details
at Goodreads.

Black Rock Observatory receives a chilling radio transmission from what student Ronald Phillips believes is an alien message from a very distant galaxy. It is New Year’s Eve, 2024, and Ronald expected a quiet night of work as the telescope searched for extraterrestrial life. When scientists become aware of the recording, they are excited and anxious to check it out and share it with the world. A recording is uploaded and the public listens and is excited and anxious. The story quickly shifts to a scary problem of people getting sick and acting strangely. As two doctors, Kevin Dyar and James Ketterly, study and investigate this strange new sickness, they realize that it might be the result of the alien recording. It becomes obvious that the disease is somehow linked to the Observatory and the alien message. After weeks of study and the strange ailments continuing, it becomes a do or die situation to find an answer. 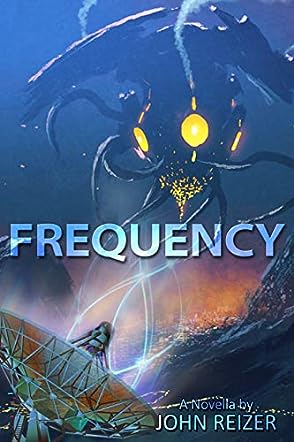 Frequency is a suspenseful science fiction story that is only 150 pages but in those pages, an amazingly interesting story is told. I am not a true science fiction genre reader but sometimes a book catches my eye and sounds too good to pass up. Frequency fits this bill and I am happy to say I was not disappointed. Frequency has all of the elements needed to make this a hard to put down book. Author John Reizer knows how to put all of the pieces together to write a story that will keep you intrigued and on the edge of your seat until the very last page. Frequency is a thrilling must-read.

I have been working on this story for several months and wanted to share it with readers. Zero conspiracies this time, but I think people will find it interesting nonetheless. As has been the case with most of my stories, FREQUENCY is fast-paced and a quick read. I believe it’s entertaining and thought-provoking. Any honest reviews on Amazon or other platforms are appreciated.