Modern allopathic medicine has been masking the signs and symptoms associated with human diseases since the profession’s inception. When people are compromised and fighting a health disorder, the immune system will cause a series of physiological expressions to help defeat the microbial invaders causing the problem.

Don’t Open Your Mouth Or You’ll Catch The Virus!

In many instances, the body’s intelligence will produce a fever that makes it difficult for the virus to replicate and spread. Temperature can also kill bacteria that might be challenging a person’s health.

Headaches and sore throats often occur when human immunity is busy fighting a battle against an infection. Inflammatory reactions in the throat can cause people discomfort but can also be instrumental in combatting and destroying microbes. And sometimes, the unpleasant symptoms will force people to slow down and not be active, allowing the individual to rest and repair.

Sneezing, coughing, vomiting, and diarrhea are also physiological expressions that help to eliminate microbes from the body. Rashes that erupt on the skin’s surface are how the immune system expels certain viruses. This is why we often see rashes form in some childhood diseases. The human immune system creates a rash to eject the virus from the body through the skin.

Over the counter and prescription drugs block the expressions of human immunity and disrupt healing. If you attempt to mitigate a disease process in this manner, you are ultimately delaying your return to good health. This is a physiological fact!

Masking A Bigger Problem Than Diseases!

The powers that be have convinced the general public that the wearing of facemasks in stores, in cars, in restaurants, at work, outside and in many other locations will help protect humanity against the fake viral pandemic currently taking place. 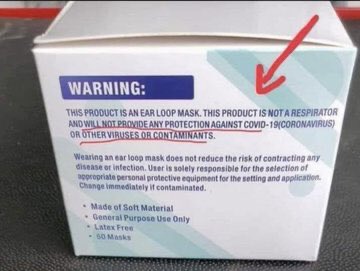 While the ear loop masks most people are wearing provide absolutely no protection whatsoever against the trillions of viruses we regularly come into contact with during a given day, they do serve an essential purpose. The facemasks help the few controlling the many to block the expression of people’s free speech — the only potential problem that could theoretically derail the success of the psyop taking place.

When people see others wearing facemasks, it confirms and reinforces in their minds that something dangerous is lurking in the atmosphere. We agree, in principle, by wearing facemasks, that Covid-19 is real and a legitimate threat to the world.

Wearing a facemask gives visibility to an otherwise invisible entity. It also provides the powers that be the momentum they require to keep the false flag event firmly etched into the psyche of citizens worldwide until a vaccine is unveiled to save the planet.